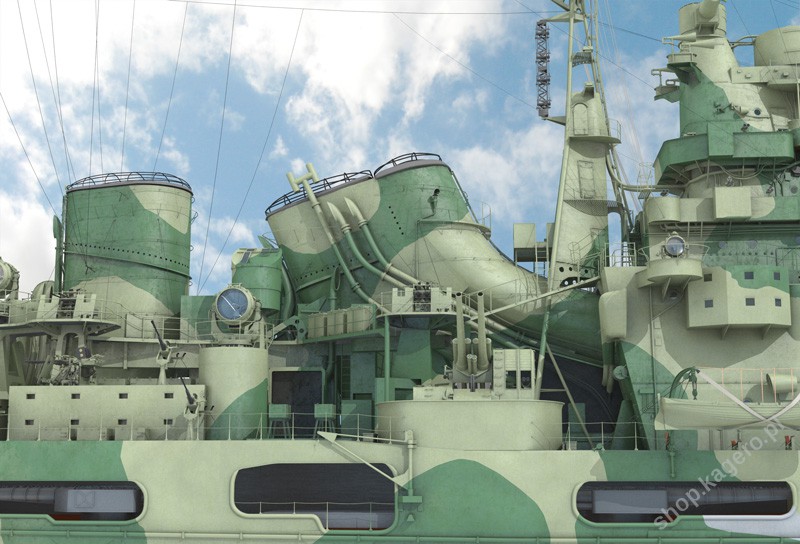 Takao 1932–1937
The heavy cruiser Takao entered service with the Japanese Imperial Navy on May 3, 1932. She was a very intriguing warship, the first of her class which also included Atago, Maya and Chokai.

After my extensive Takao monograph had been published by Conway M. P. in 1994, one of the Royal Navy reviewers wrote: “Now everybody can see how different the Japanese cruisers were from anything designed elsewhere – as if they had been built by another (alien) civilization”.
In a sense the rise of the heavy cruisers was made possible by the outcome of the Washington Naval Conference (November 12, 1921 – February 6, 1922), which green-lighted the development of lighter surface units under 10 000 tons standard displacement. As one of the Conference’s participants, Japan was allowed to build twelve A class cruisers by 1932, which later became known as heavy cruisers due to their strong armament and armor protection. 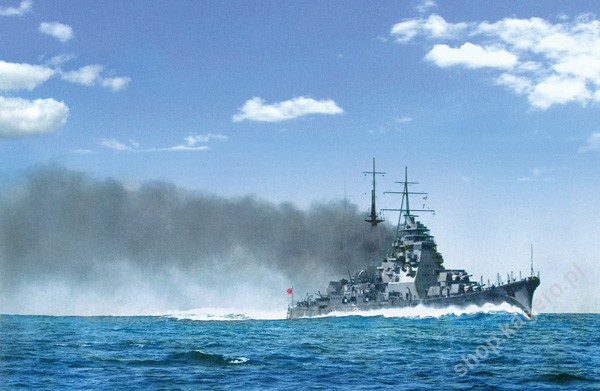 Along with her sister ships, the Takao was the final word in the design of warships of that class (the plans to build three “improved Takao type” vessels, followed by four more, were shelved after the London Conference of April 1922). Although the Takao was supposed to be a “treaty cruiser” with the displacement capped at 10 000 tons, she was already 4 000 tons above that limit at the time of launching. The refits in 1937 and 1939 further increased the warship’s displacement to 16 000 and then to 17 000 tons.
The history of the new generation of the IJN cruisers, featuring a completely new hull design, new types of armament, propulsion system and fire control, began in earnest in October 1921 when the Navy’s General Staff approved the construction of an “experimental” cruiser designed by Vice Admiral Yozuru Hiraga and his assistant Kikuo Fujimoto. Yozuru Hiraga had already made his mark as the naval architect with the design of the Naka class light cruisers,
The new cruiser was named Yubari and featured armor integrated into the hull structure, which added complexity to the process of the ship’s construction, but also offered substantial weight savings. Hiraga and Fujimoto used the lessons learned from the construction of the Yubari to build eight class A cruisers under the provisions of the “Eight-Eight Fleet Program of 1921–1929”. Among those were two Kako class warships (Kako and Furutaka), two Aoba class vessels (Aoba and Kinugasa) and four Myoko class cruisers (Myoko, Ashigara, Haguro and Nachi). Each of those “quadruplets” was refined and improved using the lessons learned from the construction of their predecessors.
In March 1927 the Imperial Navy General Staff authorized the fleet expansion plan for 1927–1931, which included the construction of additional four heavy cruisers, euphemistically referred to as “improved Myoko class”. That was clearly an understatement since compared to the Myoko the design of the new warships incorporated a number of radical changes. 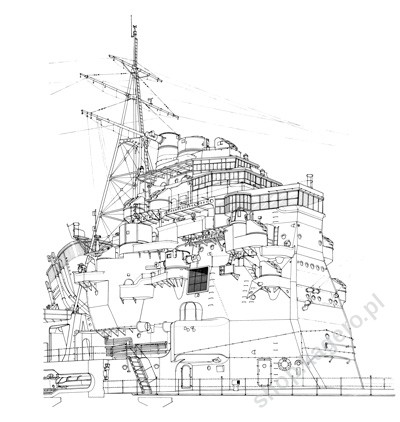 The work on the new design began in early 1925 under the direction of Kikuo Fujimoto, who by that time had been promoted to the rank of Commander. The finished project was approved by Admiral Hiraga after his return from Great Britain. The new cruiser, similarly to the earlier Myoko class vessels, was to be superior in every respect to the heavy cruisers in service with the potential enemies – the USN and the Royal Navy. The new warship was to have standard displacement of 11 531 tons and full combat displacement of 12 985 tons, which exceeded the Washington Conference limitations by almost 3 000 tons. When the ship was commissioned her full combat displacement grew further to 14 365 tons due to the design changes and improvements introduced at the construction stage. Thus the new warship ended up 10 percent heavier than planned, despite the implementation of innovative construction techniques designed to reduce the ship weight, such as electric arc welding or the use of aluminum. The overweight condition led to the reduction of the ship’s metacentric height, top speed and freeboard. Efforts were made during the 1937 and 1939 refits to address those significant issues.

The overall design philosophy of the Takao’s hull followed closely the concepts applied in the construction of her predecessors – the Myoko class cruisers. It featured modern lines, the result of extensive testing in the model basin. It measured 14.2 meters from keel to stem and 10.8 meters in the amidships section, with the height sloping down gently to 9.9 meters in the stern section. The hull’s length between perpendiculars was 192.5 meters, 201.7 meters along the design waterline and 203.8 meters overall. Maximum beam at anti-torpedo bulges was 19.0 meters while the ship’s draft was 6.57 meters. Armor protection was integrated into the hull’s structure and had a form of an armored box measuring 123.6 meters in length, which covered the forward and aft 203 mm ammunition magazines. The anti-torpedo bulges and armor protection were designed to withstand a point explosion of 200 kg of TNT. The Takao’s hull, including the armor, weighed in at 6 454 tons.,

The cruiser’s main battery consisted of five type E turrets, each mounting a pair of 203 mm/50 cal  main guns with maximum elevation of 70°, enough to use them in the AA role. The guns had the maximum range of 29 400 meters and the ceiling of about 10 000 m. The projectile’s weight was 130 kg and the weapon could fire two shots per minute. The ammunition stowage per gun was 100 rounds. Including the reserves, the cruiser carried 1 200 rounds of 203 mm main gun ammunition. The type E turrets were protected with 25 mm armor plates (front, sides and roof). The turrets also featured steel screens protecting them from the tropical heat. Similar screens were also used on enclosed fire control and rangefinder stations. The Takao was the first ship in the Imperial Japanese Navy to feature greatly improved and extended air conditioning and ventilation systems.
The ship’s medium artillery consisted of four 120 mm/45 cal guns mounted in single turrets with the maximum ceiling of 10 000 meters. Between 1932 and 1936 the ship carried light AA weapons consisting of two 40 mm Vickers and two 7.7 mm Lewis machine guns. After 1936 the Vickers guns were replaced with a pair of quad 13.2 mm Hotchkiss heavy machine guns mounted on the bridge tower. 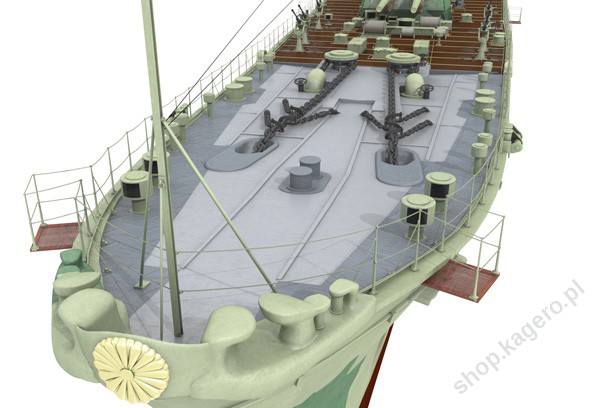 The Takao carried four twin 610 mm Type 90 torpedo launchers. The revolving tubes were mounted on the main deck’s amidships section with armored boxes (50 mm Ducol steel casing) protecting the torpedoes’ warheads. The ship was equipped with two NO2 Model 3 Kure Shiki 2 Go Shashutsu 3 catapults (from 1932 to 1938) and a pair of reconnaissance Nakajima E42N Type 90-2 float planes.
The Takao’s machinery design power output was 130 000 SHP. The propulsion system included 12 oil burning boilers and four steam turbines driving four propellers with the diameter of 8 886 mm. The ship’s fuel capacity was 2 645 tons, which translated into a range of 8 000 nm at 14 knots.
As built, the ship’s complement was to be 727 officers and sailors (48+679), but as she entered service the Takao’s crew increased to 761.
The Takao’s bridge tower certainly deserves attention. The massive, complex structure was somewhat of a record-breaker in the field of naval architecture. The superstructure exemplified the desire of the Japanese shipbuilders to pack into their vessels the systems and weapons well above the standards used by other fleets. The Takao’s bridge tower was very close in size to the superstructure of the British King George V class battleships. The superstructure was based on the design of the Myoko class cruisers, but although it had almost the same height (31 meters from keel to the top of main rangefinder compared to Myoko’s 32 meters), its internal volume was almost twice the size of Myoko’s bridge tower. The ship’s designers attempted to squeeze as many combat stations as possible into the tower’s ten levels, which resulted in a complex maze of fire control, navigation and communication systems. Special care was taken in the design of the ship’s fire control systems (artillery and torpedoes) allowing day time and night time operations utilizing the superior Japanese optics. This design concept proved its value in the early stages of the war in the Pacific. The Japanese designers chose to build a huge superstructure believing that the centralization of key battle stations and command systems was worth the price of additional weight, drag or the potential large target area. Some of the combat stations in the bridge tower were doubled with their equivalents located on the aft superstructure, above the aircraft hangar. 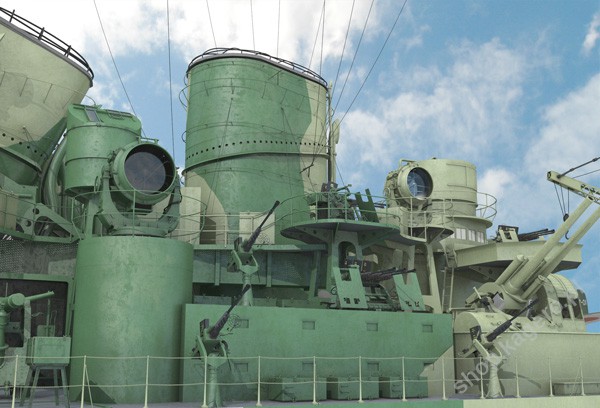 After the Takao’s hull was launched at Yokosuka, a wooden mock-up of the upper section of the superstructure was built (equipped with the actual systems and all details of the battle stations) to test its overall functionality. The testing went on between June and December 1930, which shows how much thought went into the optimal arrangement of the various systems to be installed in the ship’s superstructure. However, when completed, the actual bridge tower differed significantly from its wooden prototype.
The total cost of construction of the four heavy cruisers was 113.48 million yen (28.37 million per cruiser). The unit cost was therefore just one tenth of the cost of construction of the battleship Yamato, which came with a price tag of 281.54 million yen.
The Takao’s service history
– April 28, 1927 – the ship is laid down at Yokosuka Keigun Kosho;
– May 12, 1930 – launch;
– May 31, 1932 – commissioning; August 1, 1932 – assigned to No. 1 Yobikan and begins crew work-ups;
– December 1, 1932 to December 15, 1935 – assigned to Sentai 4 Kantai 2;
– April 1933 – Sentai 4 joins Sentai 5 (Kako, Aoba, Kinugasa) for a joint exercise. Sentai 4 operates in Japan’s home waters and in the South Chine Sea;
– November 1935 – four Takao class cruisers are assigned to Yokosuka Kebi Sentai (coastal defense);
– October 1936 to July 1937 – Takao’s first refit;
– December 1, 1937 – Takao and Maya form the Sentai 4 of Kantai 2;
– Autumn of 1937 – after Chokai joins the team on August 7, Sentai 4 of Kantai 2 begins operations in the area around Ryojun (Port Arthur);
– November 15 – Takao and Atago are moved to the reserve prior to the main modernization at Yokosuka.

The Japanese Cruiser Asama The victorious war against China in 1895 had a bittersweet...