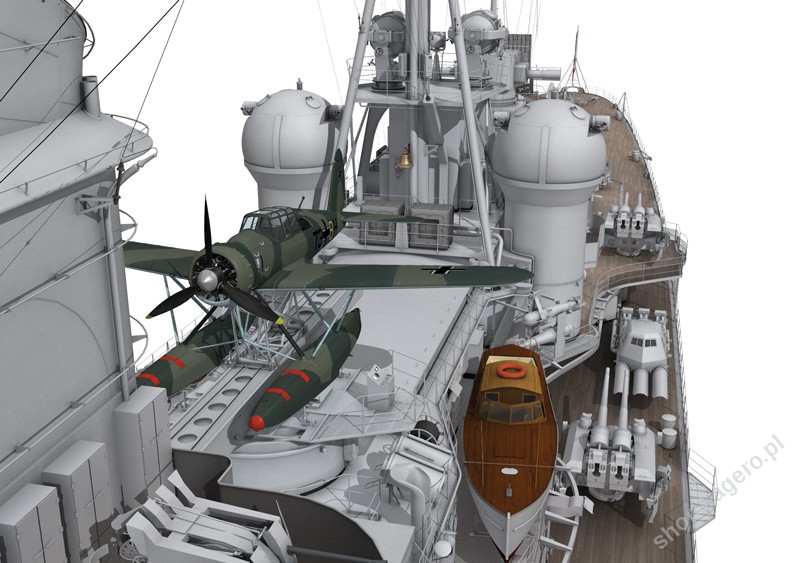 Following the defeat in the World War I, the Treaty of Versailles limited the tonnage of the German Navy to 144 thousand tons. Moreover, the treaty stipulated that new warships could only be built to replace the decommissioned ones. In 1921 a new law was enacted which brought about the creation of the Reichsmarine.

The few warships that Germany was allowed to keep were modernized and new ones were being built to replace the obsolete ones. Construction of light cruisers was a priority and the first of those, built to replace the Niobe launched in the 19th century, was the Emden. In 1927, during the disarmament conference in Geneva, Germany demanded equal right as far as the expansion of the navy was concerned. Those demands were rejected, therefore, the Reichsmarine drew up the “expansion plan”. It stipulated construction of new warships within the coming years, including submarines, which were forbidden by the Treaty of Versailles. During the Second London Naval Conference specifications of cruisers were determined and the type was divided into heavy and light cruisers. All the signatories of the treaty had problems choosing the appropriate design that would meet all set requirements and perform future combat tasks. Heavy cruiser was optimal for that purpose. In February 1934, the Reichsmarine formulated first design requirements: new warship’s displacement should be comparable to similar vessels of other navies, it should also have long range, high speed and capacious magazines.

Two armament variants were considered – twelve 150mm guns in triple turrets or eight 203mm guns in twin turrets. In April 1934, Admiral Reader was in favour of the 203mm armament. There was also an idea of arming the ship with 190mm guns, but finally, Adolf Hitler approved the design armed with 203mm main battery. Also, different propulsion systems for new cruisers were considered and the newly built warships were supposed to have either steam turbines, diesel engines or both. Despite their various shortcomings, steam turbines were chosen to power the new vessels. On March 16, 1935, Germany introduced conscription, which was tantamount to denunciation of the Treaty of Versailles. In June 1935, the German government initiated talks with the British government concerning the tonnage of the Reichsmarine and on June 18 an agreement was reached. Germany was allowed to maintain a navy of 421 thousand tons, that was one-third of that possessed by the Royal Navy. Total tonnage was divided into categories: battleships – 153.000 tons, aircraft carriers – 47.250 tons, heavy cruisers – 51.380 tons, light cruisers – 32.000 tons, destroyers – 43.000 tons and submarines – 18.445 tons. The limit allowed for construction of five 10.000 tons heavy cruisers armed with 203mm guns. The new cruiser design was drawn up by Professor C. C. Burkhardt. On October 30, 1934, contract was signed between the Reichsmarine and shipyards for construction of two heavy cruisers designated “G” and “H”, which were later respectively named the Blücher and the Admiral Hipper. The third vessel, designated “J”, was later named the Prinz Eugen. Apart from those three, other two ships of that class were being built. “K” – Seydlitz, which was almost complete, when a decision was made to convert her into an aircraft carrier. Her superstructure was disassembled, but in January 1943, Hitler’s ordered stopped the conversion. At the end of the war her hull was scuttled at Königsberg (29.01.1945). The incomplete final vessel, designated “L” – Lützow, was sold to the Soviet Union. The heavy cruiser Prinz Eugen was built by the Krupp-Germania shipyard in Kiel. The ship was laid down on 24.04.1936 under construction number 564. She was launched on 22.08.1938 and commissioned on 01.08.1940.

The official displacement was 10.000 tons, but when complete the warship displaced over 18.000 tons. The entirely welded hull was built of ST-52 steel, only the armour plates were bolted. It was divided into 14 watertight compartments instead of the planned 18. The ship was launched with a straight stem, but following the experience gathered during the voyage of the battleships Scharnhorst and Gneisenau also built with straight stems, it was decided to rebuilt it into the so-called “Atlantic” bow. The modification, carried out by the Blohm-Voss shipyard in the summer of 1939, lengthened the hull by 4.8m.

The ship was relatively well-armoured. The upper deck was 12-30mm thick, while the thickness of the armoured deck was 20-50mm. Both were made of Ww (Wotan soft) steel. Side armour was 70-80mm thick and the conning tower was 50-150mm thick. Both were made of Wh (Wotan hard) steel. The main battery turrets were protected by 60-160mm KC (Krupp cemented) armour, while the anti-aircraft guns had 17mm thick armour.
Propulsion

the ship had three Germania Werft turbines with designed power output of 132.500 hp and the maximum of 136.000 hp. Superheated steam at the working pressure of 73 atm and temperature of 450 degrees Celsius was produced by 12 La Mont-type boilers. The turbines were located in two and the boilers in three compartments. The fuel capacity was 3.250 tons. The range was 7850 nm at 18 knots or 3.000 nm at 30 knots. The maximum speed was 33.4 knots. The ship had three 4.15m diameter propellers. Electricity on board the Prinz Eugen was provided by 3 generators powered by 150 hp diesel engines and one 350 hp generator, 4 steam powered generators of 460 hp and one of 230 hp generator. The ship also had two 150 kVA AC generators. Total power output of the generators was 2.870 kW. 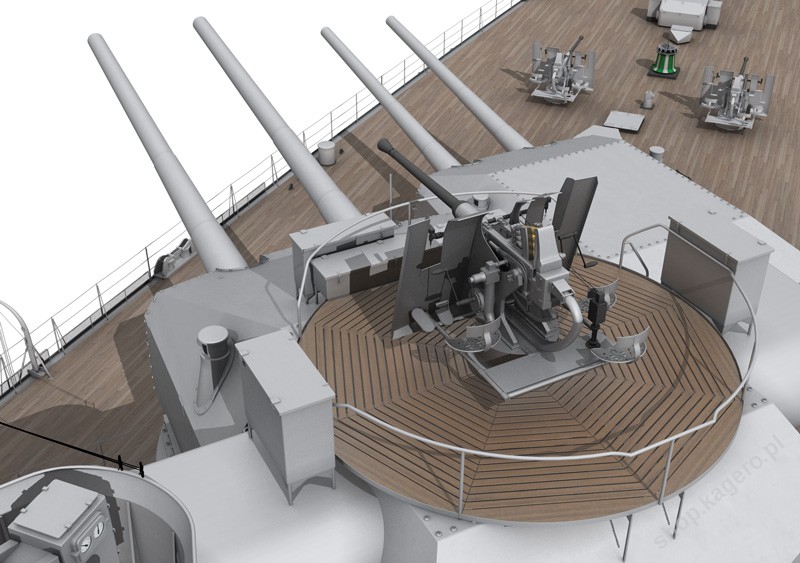 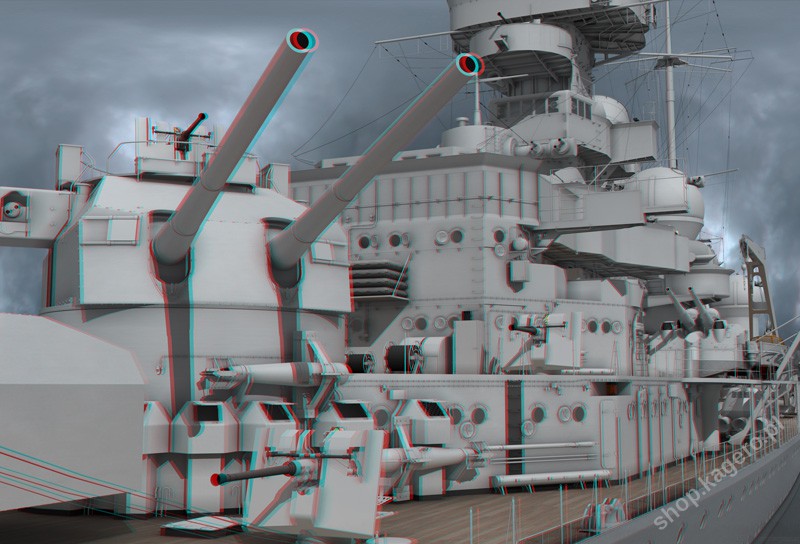 On the night of June 1/2, 1940, during the air raid against the harbour and the shipyard, the ship was hit by two aerial bombs, while she was still moored at the fitting-out berth. The damage was slight and it did not delay her commissioning date. The Prinz Eugen was officially commissioned on August 1, 1940. Until January 25, 1941, there were trials, gunner trainings and the crew was getting familiar with the ship. The final fitting-out work was also being completed. Since January 25 until April 8, 1940, the ship remained at the Deutsche Werke shipyard at Kiel. Between April 17 and 22, she took part in the joint manoeuvres in vicinity of Gotenhafen (Gdynia) with the battleship Bismarck (with Adm. Günter Lütjens on board) before their sortie in the Atlantic (Operation Rheinübung). On April 23, while the cruiser was on the way to Kiel, a magnetic mine detonated near her hull, when she was already in the Bay of Kiel. The explosion deprived the ship of electricity. The turbines received no steam as the shock jammed the valves. Shortly, the emergency parties managed to get the turbines running and the ship limped to the shipyard, where she entered the dry dock. Following the inspection, it turned out that the propeller shafts bearings were fractured. Also damaged were the artillery directors and other fire control systems. The Prinz Eugen left the shipyard on May 2 and returned to Gotenhafen to complete preparations for the Atlantic sortie.The operation was prepared following the success of an earlier Atlantic sortie of the battleships Scharnhorst and Gneisenau, which managed to sink 22 Allied ships sustaining no losses. It was expected that sending larger warships would mean greater success. On May 18, tugboats lead the Prinz Eugen out of Gotenhafen and the turbines were engaged in the roadstead, as there were fears that the pumps might draw in dirty water from the harbour basins. Until 21.00, the ship was manoeuvring in the roadstead and then she headed for the Danish straits, via a route leading north of Bornholm. On May 19, at about 11.25, near Cape Arcona, she met the Bismarck, which departed Gotenhafen at about 02.00. Both ships continued their journey together and on May 20, at 13.00, they were spotted by the Swedish cruiser Gotland. On May 21, both ships traversed Bergen and entered Korsofjord. On the way the German ships were being observed by Norwegian agents, who transmitted their reports to the British Admiralty. During their stay both ships bunkered fuel and then, at 19.30, put out to sea under escort of the 6th Destroyer Squadron. On May 22, at 04.20, the escort was sent back to Trondheim. A few hours later a report was received, which informed the Germans, that the British made an air raid on the area where the ships had been bunkered. Due to excessive fuel consumption the ships slowed down to 24 knots. At noon, in dense fog, the German task force approached the coast of Iceland. On May 23, at 19.22, observers on board the Bismarck spotted a silhouette of an unidentified ship. At 20.44, the cruiser Suffolk, for she was the aforementioned stranger, opened fire on the Prinz Eugen, but scored no hits. On May 24, at 02.28, yet another cruiser was spotted, it was the Norfolk. At 05.43, the observers on board the ship spotted the battlecruiser Hood. Ten minutes later the British task force (Hood and Prince of Wales) opened fire at the Germans. The British mistook the Prinz Eugen for the Bismarck and as a result the Hood fired on the Prinz Eugen, while the Prince of Wales concentrated on the Bismarck. During the artillery duel, the Bismarck scored a hit on the Hood starting a fire on board of the British battlecruiser. At 06.00, a salvo from the Bismarck hit the Hood. One of the shells penetrated the deck between the second funnel and the mainmast and exploded in the magazines. The British battlecruiser went down and only 3 seamen of her entire crew survived. Then, the Bismarck concentrated her fire on the Prince of Wales, scoring a hits on her navigation bridge. A few minutes later the British battleship was hit by three more shells fired by the Prinz Eugen and four by the Bismarck. However, the German battleship was also damaged, receiving three hits. One of those was especially unlucky.

The Japanese Cruiser Asama The victorious war against China in 1895 had a bittersweet...