The Tirpitz, sister ship of the legendary Bismarck, was the last battleship to be procured by the German Kriegsmarine.

As fate would have it, she spent almost the entire war in Norway and although she never got a chance to use her guns against enemy warships, her existence alone was a major threat to Allied shipping. Being a “fleet in being” in the fjords of Norway, Tirpitz tied up huge Allied resources to keep her in check. It is no wonder then that the Allies attempted to take her out of action at all costs and subjected Tirpitz to countless air and surface attacks throughout her service career. 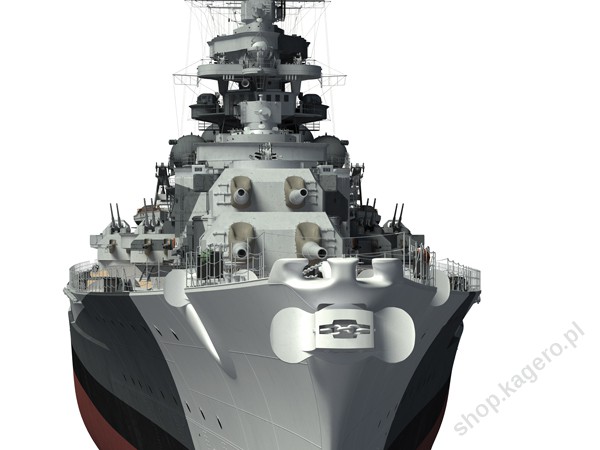 The work on a design of a 35,000 ton battleship began in Germany in 1932, initially under a veil of secrecy. The ship was to be heavily armored, fast and armed with a battery of eight 33 cm main guns, although those were upgraded to 38 cm guns after the Germans had gained access to information about the caliber of main guns mounted on the French Richelieu-class battleships.
Following the signing of the Anglo-German Naval Agreement in 1935, the Kriegsmarine was officially allowed to procure battleships displacing up to 35,000 tons. The limit was further increased to 45,000 tons on April 1, 1937 when the “escalator clause” of the Second London Naval Conference took effect. The final design displacement of the new battleship was 42,000 tons. The Germans planned to build two vessels of the new class, initially referred to as “F” and “G”, or “Ersatz Hannover” and “Ersatz Schleswig-Holstein” after the old pre-dreadnoughts the new battleships were meant to replace. Later the ships were christened Bismarck and Tirpitz. 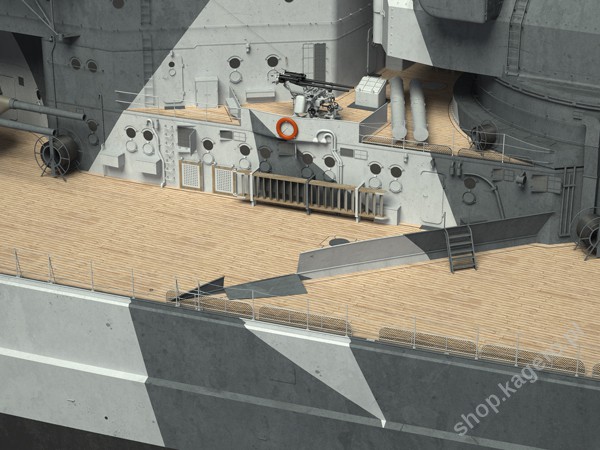 The new battleships were designed for the primary role of medium-distance surface engagements, which meant their armor protection was of utter importance. The main armor belt designed for the Tirpitz was to be 315 mm thick, while the most vital areas of the hull were to be covered with a 120 mm main armored deck.
The ship was powered by three sets of Brown, Boveri & Cie geared steam turbines developing 163,000 SHP, although turbo-electric or diesel propulsion systems were also initially considered. The turbines propelled the ship to an impressive top speed of almost 31 knots , making the battleship truly “faster than anything stronger and stronger than anything faster”. The Tirpitz also had an impressive range as the German corsairs in the Atlantic did not have access to overseas naval bases and had to rely mainly on their internal fuel supplies.
The battleship was also very heavily armed. Main battery consisted of eight 38 cm guns mounted in four twin turrets (two forward and two aft). Secondary artillery included twelve 15 cm guns in six twin turrets (three on each side of the ship). The secondary guns were designed to be used against light surface targets. The battleship’s anti-aircraft armament included sixteen 10.5 cm HA guns arranged in eight twin mounts, sixteen 3.7 cm guns (also in twin mounts) and, initially, twelve single-mounted 2 cm flak guns. As the threat of air attacks increased during the battleship’s operational service, the anti-aircraft suite was systematically modified and upgraded. In September 1941 the ship received a pair of quad 53.3 cm torpedo launchers, although the wisdom of mounting that type of armament on a World War II battleship was rather questionable. 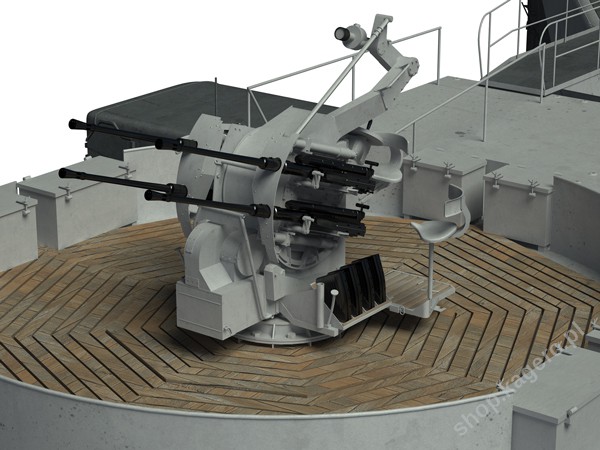 Construction and commissioning
Kriegsmarine Werft in Wilhelmshaven received a contract to build the battleship on June 14, 1936. The work on the hull construction began on October 24 and the ship was launched on April 1, 1939. During the launch ceremony the official name of the new battleship was finally revealed. The vessel was to be named after Großadmiral Alfred von Tirpitz, the father of the Imperial German Navy. The battleship was christened by the late Admiral’s daughter, Frau von Hassel. 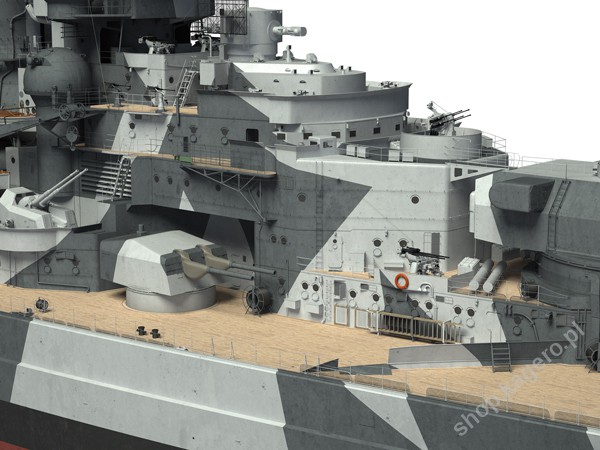 The Tirpitz was not commissioned until almost two years later, on January 23, 1941 with Kapitän zur See Friedrich Karl Topp as her first skipper. In March the battleship sailed to Kiel via the Kiel Canal in preparation for a series of sea trials in the Baltic. On May 5, while the ship made a port call at occupied Gdynia, she was visited by Adolf Hitler and his entourage. In the summer the battleship’s crew carried out gunnery practice exercises to fine-tune the main battery guns. Following the invasion of the Soviet Union the Germans established Baltenflotte, a naval force commanded by Vizeadmiral Otto Ciliax, with Tirpitz as its flagship. Other Baltenflotte vessels included the heavy cruiser Admiral Scheer, light cruisers Emden, Köln, Leipzig and Nürnberg, as well as destroyers and auxiliary vessels. Between September 26 and 29 the force patrolled the area around Aland Islands in a bid to prevent the Soviet fleet from breaking out of their base in Kronstadt.
Following the failure of Operation Rheinübung and the sinking of Bismarck during her corsair Atlantic cruise, Hitler issued a directive forbidding any future operations of that kind. A suggestion made by Kriegsmarine’s commander Großadmiral Erich Raeder led to a decision to deploy Tirpitz to Norway. Operating from the relative safety of Norwegian fjords, the battleship would be able to attack shipping lines in the Arctic, forcing the Allies to provide heavy escort for all convoys sailing off the Norwegian coast. That way, at a low cost, the Germans would impose a heavy logistical burden on the Royal Navy. 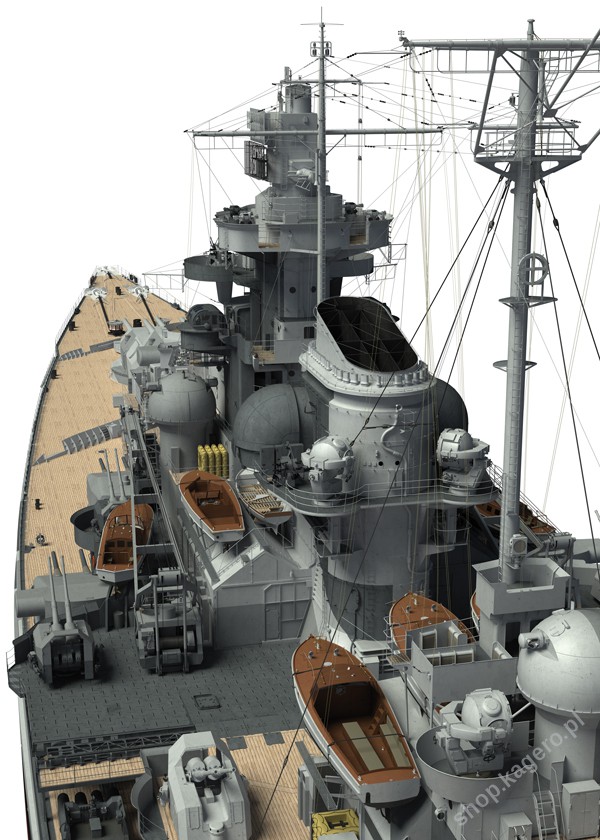