From the unit’s activation to the end of the Phony War: May 1, 1939 – May 9, 1940
On May 1, 1939 the existing Geschwaderstab and I. and II./JG 133 were re-designated Stab, I. and II./JG 53. At the outbreak of the war the wing’s units were stationed in western Germany at Wiesbaden-Erbenheim and Mannheim-Sandhofen airfields with their area of responsibility stretching from Saarbrücken to Trier

The Geschwader’s first contact with the enemy came on September 9, 1939. At 11.36 Ofw. Walter Griemmling from 1./JG 53 shot down a reconnaissance Bloch MB.131 just north-east of Saarbrücken (Griemmling misidentified his victim as a Blenheim bomber). Three hours later, while patrolling in the same area, Lt. Wilhelm Hoffmann from 3./JG 53 dispatched a French Bloch MB.200.
On the following day the crews of I./JG 57 claimed three Mureaux kills. Another victory was added to the unit’s tally on September 17 by Oblt. Wilhelm Balfanz, while Hptm. Werner Mölders, the CO of 1./JG 53, opened up his World War II score board on September 20 when he downed a French Curtiss H.75 fighter. On the same day the crews of II./JG 53 (Oblt. Heinz Bretnütz, Lt. Albert Richert and Lt. Kurt Lüdtke) achieved the first three kills for their unit. It was on the same day that JG 53 suffered its first casualty of the war: Uffz. Martin Winkler from 3./JG 53 was seriously wounded during a fight against Curtiss H.75 fighters and died four days later in a hospital. 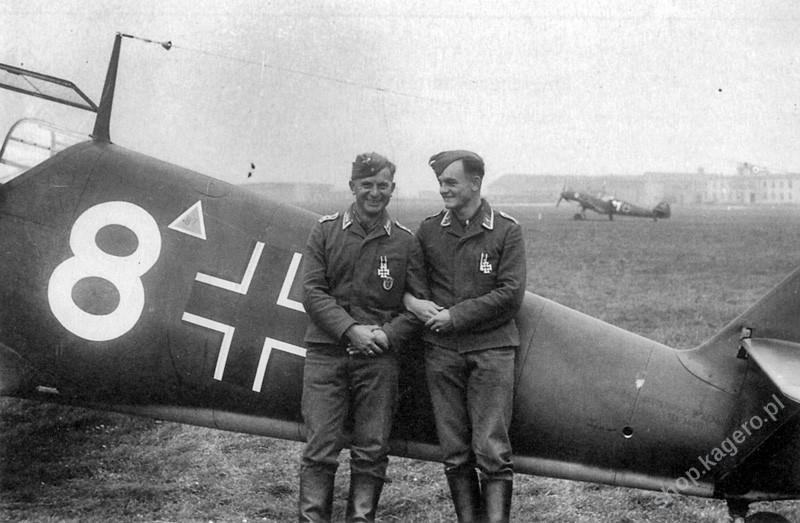 On September 26, 1939 Hptm. Werner Mölders was appointed the CO of the newly established III./JG 53 based at Wiesbaden-Erbenheim.
The heaviest fighting of the fall of 1939 involving the aircrews of JG 53 came on September 30. On that day 10 Allied aircraft were claimed by members of I./JG 53, while the crews of II./JG 53 reported three air-to-air kills. The Germans’ own losses included seven aircraft, four aircrews killed in action and one wounded.
On October 30, 1939 Hptm. Werner Mölders scored the first kill for III./JG 53 when he downed a British Blenheim bomber.
The JG 53 pilots had their first run-in with the RAF fighters on December 22, 1939. In the engagement over Metz against the aircraft from No. 73 Sqn Hptm. Werner Mölders and Oblt. Hans von Hahn (both from III./JG 53) each claimed a Hurricane kill.
The harsh winter of 1939/1940 significantly reduced the number of combat sorties generated by each side and it was not until March and April 1940 that the tempo of air operations began to pick up again. On March 31, during the largest air battle of the spring, the crews of II./JG 53 claimed six Morane MS. 406 fighters without own losses. In total, between September 3, 1939 and May 9, 1940 JG 53 aircrews shot down 73 Allied aircraft. The wing’s casualties included seven aircrews killed in action and five lost in non-combat accidents. 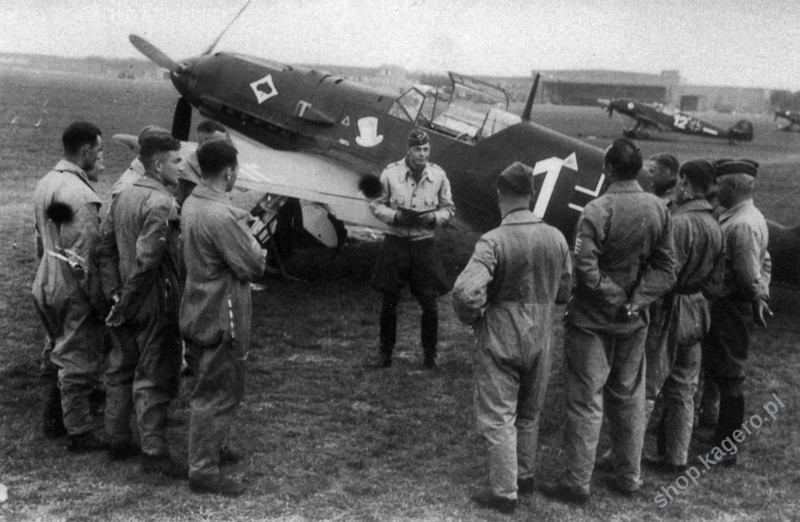 Campaign in the West: May 10 to June 25, 1940
During the first few days of the German westward drive the units of JG 53 were tasked with providing air cover to the northern flank of the advancing force and, consequently, saw little action. On May 14, after the German forces had broken through the French lines in the Ardennes and captured bridgeheads on the Meuse, the Luftwaffe command ordered I./JG 53 to deploy to Sedan. On the same day the Allied bombers flew over a dozen operations against the Meuse crossings built by the Wehrmacht sappers. The Luftwaffe responded by knocking down as many as 170 enemy bombers, including 35 kills reported by members of I./JG 53.
After the threat of air attacks on the river crossings had been eliminated, JG 53 remained in the Sedan area and continued to provide support for the northern section of the front. Although there was only sporadic air-to-air fighting, the wing’s crews did manage to add 50 more kills to their tallies before the end of May 1940. The wing’s leading ace was the CO of III./JG 53, who scored his 20th victory in World War II on May 27. Two days later he was awarded the Knight’s Cross becoming the first member of the Luftwaffe to receive this coveted decoration.
On June 3, 1940 the Luftwaffe command launched Operation Paula, a massive offensive effort directed against French airfields and aircraft manufacturing plants around Paris. On that day JG 53 shot down 14 French aircraft against own losses of two aircrews. 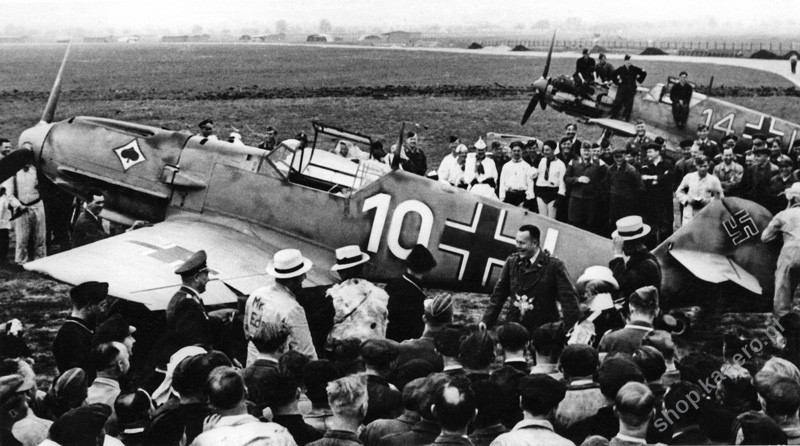 Two days later the German forces commenced their final push towards Paris, code-named Operation Fal Rot. Operating in target-rich environment, members of III./JG 53 reported 11 air-to-air victories, including kills number 24 and 25 scored by the Gruppe’s CO Hptm. Werner Mölders. Later that day the German ace shared the fate of his victims when he was shot out of the sky by a French Dewoitine D.520 fighter. Mölders was captured and briefly became a POW until his release following the surrender of France.

During the fighting in Western Europe aircrews of JG 53 shot down 185 enemy aircraft (I./JG 53 – 61, II./JG 53 – 25, III./JG 53 – 99). Own losses included seven pilots killed in action, nine wounded and 32 aircraft.
Fighting over England and the Channel: June 26, 1940 – June 21, 1941
During the first several weeks after the fighting in Western Europe had ended the units of JG 53 were based in Brittany and watched from the sidelines as the air offensive against England began to unfold. It was not until August 8 that the wing deployed to bases on Cotentin Peninsula and on German-occupied Guernsey. On the same day aircrews of II./JG 53 clashed with the RAF fighters over Swanage and shot down three of them without own losses. 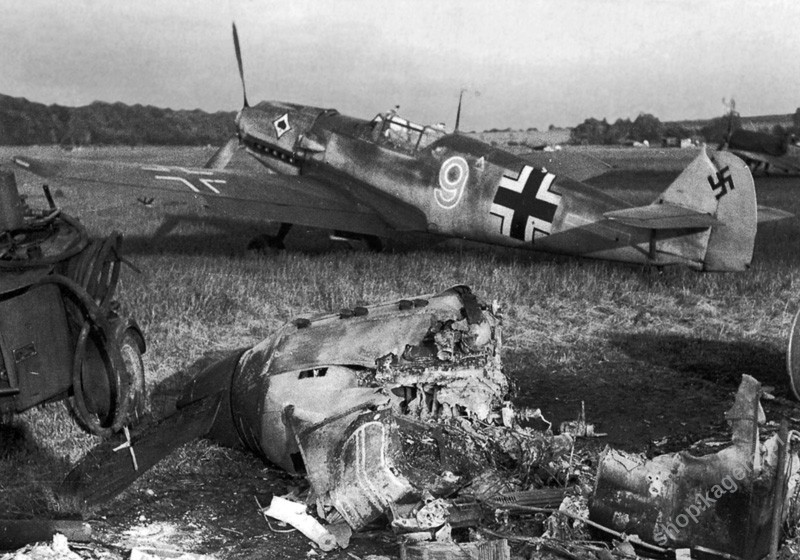 There was more fighting three days later when JG 53 aircraft escorted German bombers on a strike against Portland. This time the RAF lost eight Spitfires to the Luftwaffe fighters, who once again suffered no losses of their own. On the following day both I. and II./JG 53 scored kills, each claiming four RAF fighters. This time the victories came at a cost: the CO of III./JG 53 Hptm. Harro Harder was killed at 13.35 in an air battle over the Isle of Wight. The Gruppe’s command went to Hptm. Wolf-Dietrich Wilcke, who had been previously in charge of 7. Staffel.
August 13, 1940 was code-named Adlertag by the Luftwaffe command. A series of massive air operations planned for that day were designed to bring the Fighter Command to its knees. Although the German plans were partially ruined by poor weather, the crews of JG 53 did manage to add 11 kills to the unit’s tally. The wing lost four aircrews in the fighting, but only one of them was listed as killed in action. The other three were captured and became POWs.
Over the next several days JG 53 escorted waves of Ju 87 Stuka dive bombers during their largely ineffective missions against British radar installations. On August 18, 1940, following horrendous losses suffered by the Stuka units, the decision was made to withdraw the type from daytime operations over Britain.

The crews of I./JG 53 had their day of glory on August 25 when the unit shot down eight RAF fighters for the loss of a single pilot captured on the ground. II./JG 53 had less luck: on August 26 the Gruppe lost two of its pilots without scoring a single kill. On the same day I./JG 53 claimed four Spitfires and lost one of its own pilots.
During the first week of September the wing’s units continued escort missions in support of the Luftwaffe bombers , shooting down 30 enemy aircraft in the process. However, the wing’s own losses were far from insignificant: 11 aircrews had been killed in action, missing or captured.
The losses continued to mount after September 7 when JG 53 began to operate over London forcing the crews to abandon the “free hunt” tactics in favor of providing close protection to the Luftwaffe bomber formations. On September 15, 1940 – the Battle of Britain Day – I./JG 53 did manage to shoot down nine RAF fighters, but lost six pilots in the process. The crews of III./JG 53 fared much better: not a single pilot was lost in the fighting that cost the RAF eleven aircraft. By the end of the month additional 35 kills had been added to the wing’s tally for the cost of seven aircrews lost in combat.
In October 1940 3., 4. and 8./JG 53 were re-designated as Jabo-Staffeln (fighter-bomber squadrons) and began flying ground attack missions. By the end of the month the pilots of JG 53 had scored 25 kills, but the wing’s own losses were also high: six aircrews were killed in action, two were listed as missing and six had been captured. Among those killed was the CO of I./JG 53 Hptm. Hans-Karl Mayer, recipient of the Knight’s Cross and an ace with 22 kills to his credit. 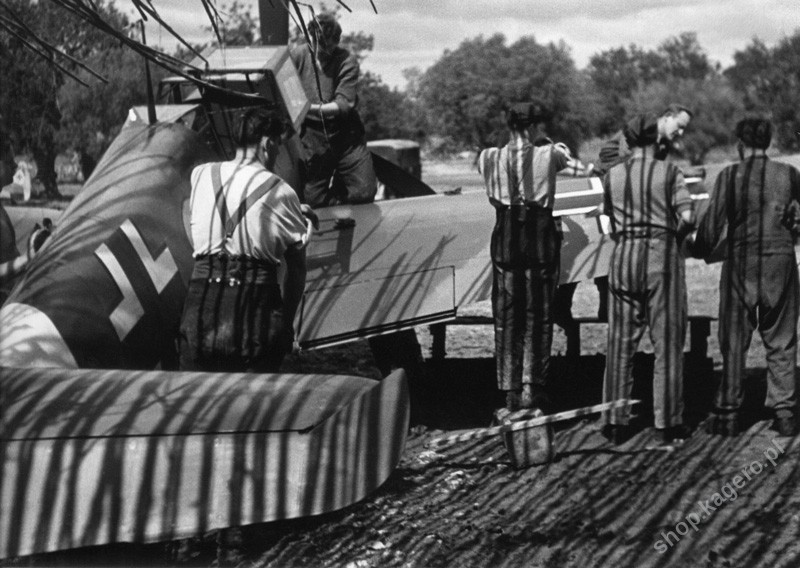 Foul autumn weather reduced the number of combat operations over the Channel and south-eastern England. The wing’s last victory in 1940 was scored on December 1 by the Geschwaderkommodore Maj. Günther von Maltzahn, who downed a Hurricane at 15.15.
During the fighting over the Channel and England in the second half of 1940 members of JG 53 scored 223 air-to-air victories ( Stab – 3, I./JG 53 – 58, II./JG 53 – 76, III./JG 53 – 86) for the loss of 100 aircraft (Stab – 1, I./JG 53 – 28, II./JG 53 – 37, III./JG 53 – 34). 39 aircrews were listed as either killed or missing in action, 10 were wounded and 29 captured.
During the first quarter of 1941 JG 53 aircrews converted to the Messerschmitt Bf 109 F-2. Sporadic combat sorties flown during that time over the Channel produced rather disappointing results. Although the wing’s CO did add three kills to his tally in March and April 1941, the crews of I./JG 53 managed only one air-to-air victory, while III./JG 53 did only slightly better recording five kills. Members of III./JG 53 had considerably more luck and claimed the destruction of 16 RAF aircraft. During the same period the wing’s losses included one pilot missing in action, four wounded and one captured.
Operation Barbarossa: June 22 – October 8, 1941
During fighting over the Soviet Union the wing’s Gruppen operated independently. I./JG 53 was at that time the only JG 53 group to be directly subordinated to Stab/JG 53 and formed part of Luftflotte 2. II./JG 53 (without 6./JG 53, which remained in north-western Germany to protect the North Sea coast against the RAF strikes) was subordinated to Stab/JG 54 operating as part of Luftflotte 1. III./JG 53 was under control of Stab/JG 27 within Luftflotte 2.
All JG 53 Gruppen began their Russian campaign at dawn on June 22, 1941. During the first hours of the invasion they were tasked with escorting Luftwaffe bomber formations attacking Soviet airfields along the border. It was not long before the crews of JG 53 had a chance to engage enemy aircraft, which invariably showed up in large numbers. Whatever numerical advantage the Soviets enjoyed was quickly denied by much better training of the Luftwaffe aircrews and the superior performance of their Bf 109 F-2 fighters. On the first day of the campaign alone the wing’s pilots shot down as many as 71 Soviet aircraft (/JG 53 – 6, I./JG 53 – 18, II./JG 53 – 11, III./JG 53 – 36) for the loss of only three of their own machines.