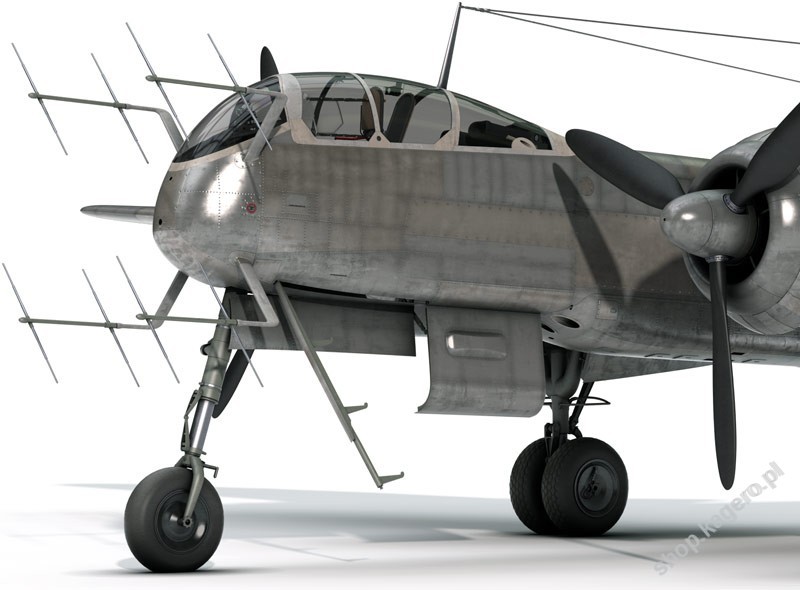 The Heinkel He 219  in service with the Luftwaffe

The same pilot, again flying a He 219, scored another victory on the night of 23rd/24th August 1943. This time, at 23:40 hrs, a Lancaster fell to his guns southeast of Emmen.
On the night of 30th/31st August 1943, the He 219 V12 and a Bf 110 G-4 of 3./NJG 1 scrambled from Venlo to challenge another British incursion. The Bf 110 G-4 was flown by Oblt. Heinz Strüning, while the He 219 V12 was flown by Hptm. Hans-Dieter Frank. Oblt. Strüning intercepted and shot down three Halifax bombers in quick succession (the first at 03:20 hrs, 20 km west of Mönchengladbach, another at 03:45 hrs again west of Mönchengladbach, and one more at 03:50 hrs 60 km southwest of Mönchengladbach). In an overlapping action, at 03:18 hrs, Hptm. Hans-Dieter Frank bagged a Stirling over Mönchengladbach, then at 03:30 hrs a Wellington over Rickelrath. This time, however, the bomber’s rear gunner spotted the assailant and hit the He 219 in the fuselage and one engine. Hptm. Frank shut off the stricken engine to avoid a fire and pressed on. Five minutes later, at 03:35 hrs he knocked down a Lancaster over Brüggen and easily landed on one engine at Venlo. 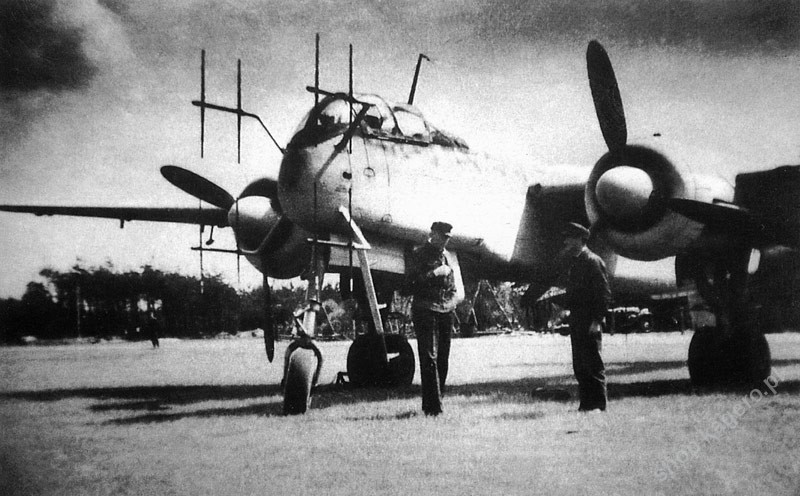 The same two pilots took the He 219s into action on the night of 5th/6th September 1943. At 00:15 hrs Hptm. Hans-Dieter Frank, flying the He 219 V12, shot down a Lancaster northwest of Pirmasens. Oblt. Strüning, who flew the He 219 V10, was less fortunate. During his attack on a four-engined bomber the deflection he laid off proved too wide, and his first salvo fell off the mark. At the same instant the quadruple machine guns of the British tail gunner opened up. A hail of bullets raked the He 219 from nose to tail. Strüning instinctively zoomed up to spoil the gunner’s aim, but another burst tore into the Heinkel’s cockpit through the floor, shooting off the fuel selector valve. Shortly afterwards both engines, starved of fuel, spluttered and froze motionless. The crew resolved to bail out. As soon as they had jettisoned the canopy, it turned out that their seat ejection system was inoperable. Strüning pulled up to give his radio operator a chance to get out of the cockpit, and moments later he himself tumbled over the side, colliding with the aircraft’s antenna and stabilizer. He was badly bruised and suffered some broken ribs, but he managed to pull the ripcord in time and land safely. His radio operator, Ofw. Willi Bleier, was killed; his body was found a few days later.
On the night of 27th/28th September 1943 an aerial armada of 678 RAF bombers struck off for Hanover. Among the defenders was the Kommandeur of I./NJG 1, Hptm. Hans-Dieter Frank, at the controls of He 219 A-03, W.Nr. 190 053, coded G9+CB. Some 25 km northwest of Celle, as he was overtaking a Messerschmitt Bf 110 G-4 of Geschwaderstab NJG 1, the two machines collided, with disastrous results. They crashed five km south of Bergen. Hptm. Frank managed to eject from the cockpit and his parachute deployed correctly, but he was already dead. He had neglected to pull out the leads that connected his helmet to his onboard radio before pulling the ejection lever. The electrical cable twisted around his neck and crushed his larynx. Ofw. Erich Gotter, Frank’s radio operator, was thrown out of the cockpit before he could activate his ejection seat. He failed to open his parachute and fell to his death. The entire crew of the Bf 110 G-4, coded G9+DA – Hptm. Friedrich, Oblt. Gerber and Ogfr. Weißke – also perished.
I./NJG 1 was put under the command of Hptm. Manfred Meurer, a recipient of the Knight’s Cross with Oak Leaves. At that time the Gruppe had seven He 219 A-0s on strength, only two of which were usually serviceable. On the night of 18th/19th October 1943, Hptm. Meurer scored his first victory at the controls of a He 219. While fighting off a bombing raid aimed at Hanover he shot down a Lancaster over Erichshagen at 20:05 hrs for his 57th victory.
On 20th October 1943 another aircraft was lost. It was He 219 A-04, W.Nr. 190 054, coded G9+CB of Geschwaderstab NJG 1. That night the weather was marginal, with squalls of freezing rain. At 21:30 hrs the pilot, Lt. Walter Schön, reported contact with some four-engined bombers, but moments later his aircraft’s echo disappeared from the ground radars. The next morning locals from the village of Storbeck near Stendhal came across the wreck. The aircraft had slammed vertically into the ground at high speed, leaving a crater three meters deep and eight metres wide. Shortly afterwards the bodies of the two crewmembers (Lt. Walter Schön and radio operator Uffz. Georg Marzotke) were found along with their ejector seats - some two kilometres away from the crash site.

On the night of 22nd/23rd October 1943, at 21:20 hrs over Bühne-Haarbrück, Hptm. Meurer shot down another Lancaster. He was also the last pilot to score a victory in 1943 with a He 219: on the night of 3rd/4th November, while contesting another RAF foray against Düsseldorf, he shot down a Halifax, some 14 km northeast of Tilburg at 20:15 hrs.
During high altitude flights it was found that the cockpit heating provided for the He 219 A-0 was insufficient. Condensation persistently gathered on the inside of the cockpit transparencies, and at height it instantly turned into a solid layer of frost, blinding the crew to the outside world. Besides this, there were still incidents involving canopy cracking, which impaired the pilot’s vision on landing. The problems were severe enough to warrant all seven He 219s hitherto operated by NJG 1 to be despatched to Rechlin. The decision was made on 5th November 1943.
On 8th December 1943 the Heinkel company prepared the delivery of seven He-219s: the A-013, W.Nr. 190 063; A-015, W.Nr. 190 065; A-016, W.Nr. 190 066; A-017, W.Nr. 190 067; A-020, W.Nr. 190 070; A-022, W.Nr. 190 072; and A-025, W.Nr. 190 075. On the night of 21st/22nd January 1944, Hptm. Manfred Meurer, the Kommandeur of I./NJG 1, took off in He 219 A-0, W.Nr. 190 070, coded G9+BB. His target was a stream of bombers heading for Magdeburg. At 23:10 hrs he shot down a Halifax over the city. Then, at 23:50 hrs, some 20 km southwest of the city, he engaged a Lancaster. He scored decisive hits on the bomber (for his 64th and last victory) but moments later he crashed into his quarry. Both Hptm. Manfred Meurer and his radio operator, Ofw. Gerhard Scheibe - as well as the seven-man crew of the Lancaster - were killed on the spot.
The fallen Meurer was succeeded as Gruppenkommandeur of I./NJG 1 by Hptm. Paul Förster, who at the age of 42 was one of the oldest Luftwaffe pilots to remain in active service. Förster had enlisted with the Cadet Corps when he was barely 14, and after the Great War he had fought with the Freikorps. Later, he served with the Reichswehr, which he left as a reserve officer. In 1936 he joined the re-born German armed forces and underwent pilot training. His first operational posting was to ZG 1, which at that time operated Messerschmitt Bf 110 twin-engined heavy fighters. In spring 1940, during the campaign in the West, he scored two victories. However, he was himself shot down and injured. After recuperating he served as a flight instructor, then a staff officer. In 1943 he was retrained as a night fighter pilot and, from 1st June 1943, he served with I./NJG 1. Due to his great experience in flying combat aircraft he was selected for testing the He 219. At the time he was promoted to become the new Kommandeur of I./NJG 1, he had six night victories to his credit.

In February 1944 a new night fighter outfit was commissioned, designated Nachtjagdgruppe 10. It was tasked with the operational testing of new tactics and equipment. Hence, NJGr 10 was slated to fly the latest designs, the He 219 Uhu and the Ta 154 Moskito.
More successes followed. On the night of 24th/25th March 1944, at 00:30 hrs, Oblt. Josef Nabrich of 2./NJG 1, flying a He 219, shot down a Lancaster over Eindhoven for his eighth victory. At dawn on 31st March 1944, in the Abbeville area, Hptm. Ernst-Wilhelm Modrow of 2./NJG 1 bagged two Halifaxes, at 04:13 hrs and at 04:30 hrs. He 219s were again in action on the night of 11th/12th April 1944. At 23:02 hrs, Fw. Rauer of 3./NJG 1 shot down a Lancaster, which crashed 42 km east of Antwerp; then, at 23:37 hrs, Oblt. Werner Baake of 2./NJG 1 got a Lancaster, which came to grief some 100 km east of Ouddorp. On the same night, Uffz. Herter and Gefr. Perbix of 2./NJG 1 fired off their ejector seats and both safely landed on their parachutes - the first complete crew to do so under combat conditions. A delighted Prof. Ernst Heinkel awarded each of the two airmen 1,000 RM.

In April 1944 Nachtjagd-Ergänzungsgruppe (an operational training unit) stationed at Grove, Denmark, received its first He 219 (though not equipped with radar).
May 1944 witnessed a peak in the successes achieved by He 219s in defence of the Reich. On the night of 1st/2nd May, at 00:25 hrs Hptm. Modrow chalked up his ninth victory. This time he hunted down a Halifax, which fell out of the sky some 50 km northwest of Brussels. On the 6th/7th, at 23:55 hrs, a He 219 crewed by Oblt. Werner Baake and Uffz. Rolf Bettaque of 2./NJG 1 intercepted a Mosquito bomber and sent it crashing down in flames. They didn’t stop at that; at 00:09 hrs they claimed the destruction of a four-engined bomber, but that victory was not confirmed by OKL.
Despite such successes, the first serial production He 219s to see operational service fell short of expectations. It was established that no other Luftwaffe night fighter could match its speed, armament and ease of handling, but when fully loaded with fuel and ammunition, the He 219 was unable to climb higher than 8,500 m. Only with nearly empty fuel tanks and reduced armament was the He 219 able to reach 10,000 m. As for its maximum speed, the He 219 could attain the calculated 605 kph only without radar equipment. Laden with drag-producing FuG 220 antennas and flame dampers, it could reach only 560 kph at 6,200 m. It was an improvement over the 510 kph attained by a Messerschmitt Bf 110 G-4 fitted with similar equipment, but definitely not good enough to label the He 219 ‘the scourge of the Mosquitos’.
On the morning of 7th May 1944, at 07:05 hrs, He 219 A-0 W.Nr. 190 115 crashed near Süchteln on a training flight. Its crew, Fw. Emil Heinzelmann and Uffz. Wilhelm Herling, were killed. It is very likely that the aircraft fell prey to a British Mosquito intruder. 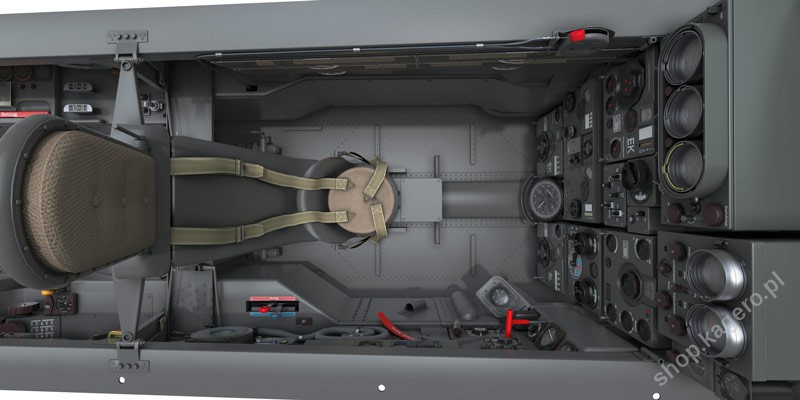