B-17 Flying Fortress in Combat over Europe 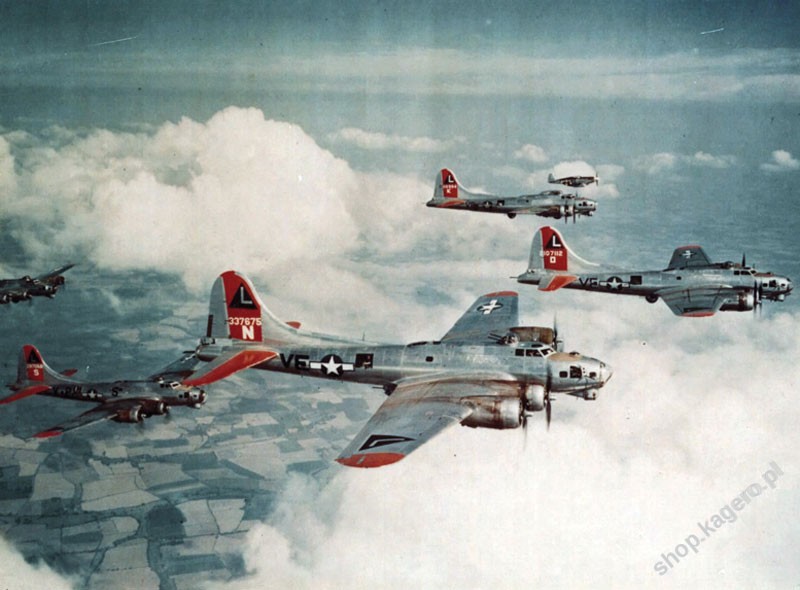 In February 1934 William E. Boeing, a renowned aviation pioneer, won a USAAC tender and was authorized to build a prototype of his four-engined bomber. The XB-15 was a huge aircraft, with wingspan of 149 feet (45.52 m) – about one third more than the B-17 it preceded. However, the engines it was to be equipped with never materialized, hence the XB-15 proved underpowered.

In May 1934 the Army issued another request for proposals for a multi-engined bomber. Unlike his competitors, Martin and Douglas companies, Boeing came up with another four-engined aircraft. The Model 299 – B-17 prototype – was basically a scaled-down version of the XB-15. After a rollout ceremony a local Seattle newspaper called it a “flying fortress” and the name stuck. The aircraft first flew on 28th July 1935.
The first serial-production version was B-17B, equipped with the top-secret Norden bombsight, which was regarded as a marvel of technology at that time. In late July 1940 the first B-17C was ready to fly. Twenty aircraft were supplied to the Great Britain (where the type was known as Fortress I) under Lend-Lease provisions. They were grouped in No. 90 Sqn RAF. On 8th July 1941 the British B-17s, three aircraft in all, carried out their first bombing raid, targeting the Kriegsmarine base at Wilhelmshaven. The early operational service revealed some serious deficiencies of the design. First and foremost, the aircraft’s defensive capabilities were far from adequate. On 8th September 1941 German fighters easily shot down two of the four Fortress Is of No. 90 Sqn RAF dispatched to bomb the German pocket battleship Admiral Scheer docked in Oslo, Norway. By September 1941 the British lost, in combat and accidents, nearly half of their 20 B-17s. Somewhat disappointed, they relegated the remaining aircraft to Coastal Command for long-range patrols.
Meanwhile, in spring 1941 Boeing commenced deliveries of the B-17D. The crew and vital parts of the aircraft were now protected by more armor and the fuel tanks were self-sealing. Most of the D models were sent to the Hawaii and Philippines, where the war caught up with them in December 1941.
In September 1941 the first B-17E rolled off the assembly line. It was a major redesign. The tail section, lengthened by six feet (1.8 m), housed a tail gunner station armed with twin-mounted .50 inch (12.7 mm) machine guns. Two powered fully traversable turrets were added, one mounted ventrally and the other in dorsal position, directly behind the cockpit, both armed with twin ‘fifties’. Waist gunner stations on either side of the fuselage were fitted with bigger, rectangular windows. Enlarged tail surfaces much improved the aircraft’s handling. Since the remote-controlled Bendix turret, mounted under the belly, proved impractical, it was soon replaced with Sperry ball turret – a hydraulically lowered and raised ball with a gunner inside; it was electrically operated and armed with twin-mounted .50 inch machine guns.

In service with the US 8th Army Air Force (ETO)

The Flying Fortresses were the core and the main striking force of the 8th AF stationed in England. This most powerful of the USAAF air forces had over 2,000 heavy bombers, 1,000 escort fighters and about 200,000 personnel at the peak of its strength.
The first American Flying Fortresses (B-17Es) arrived in England in July 1942. They debuted on 17th August 1942, when 12 aircraft of 97th BG headed for Rouen-Sotteville to strike the largest marshalling yards and engine shed in northern France. Before the month was out, a new Flying Fortress model arrived in England. The B-17F was equipped, among other improvements, with wider paddle-bladed propellers and uprated engines. The B-17F received a long series of minor modifications with successive production blocks. Overall, 3,405 aircraft of this model were produced (some under licence by Douglas and Lockheed-Vega plants).
Although initially B-17s didn’t venture beyond the range of their Spitfire escorts, losses were only to be expected. On 6th September 1942 the inevitable happened – B-17F (s/n 41-24445) of 97th BG flown by 2/Lt. Clarence Lipsky went down north of Amiens, France. The first American Flying Fortress shot down over Europe was credited to Hptm. Karl-Heinz Meyer, the commander of II./JG 26. 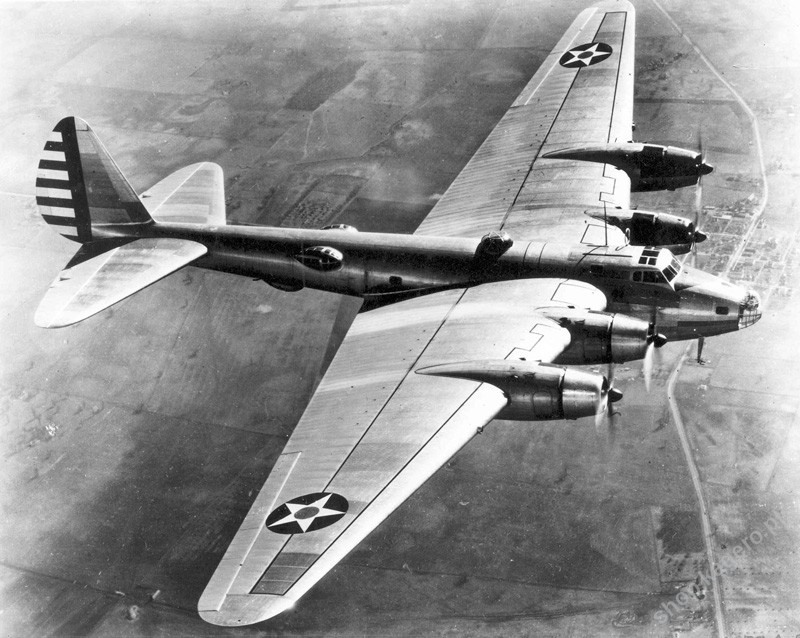 In November 1942 two bomb groups – 97th and 301st – were diverted to the 12th AF to support the invasion in Morocco and Algeria (operation ‘Torch’). In the ensuing six months the B-17 force of the 8th AF comprised only four groups (91st, 303rd, 305th and 306th), forming the 1st Bombardment Wing.
The 8th AF carried out its first raid against a target in Germany on 27th January 1943. A formation of 64 Flying Fortresses and 27 Liberators was to bomb Vegesack shipping yard near Bremen (eventually, as the target was obscured by clouds, they hit Wilhelmshaven). In spring 1943 small numbers of B-17s continued raiding German ports on the coast of North Sea and the Kriegsmarine bases in France. Four more B-17s groups arrived in England at the turn of April and May 1943. Three of them – 94th, 95th and 96th BGs – formed the ‘long-range’ 4th Bombardment Wing. The new B-17Fs they operated were equipped with additional fuel tanks in outer wing sections, which increased the B-17’s range by 40%. At the turn of June and July 1943 the 8th AF introduced group and wing identification markings for its bombers. Henceforth the B-17s of the 1st BW carried a triangle, and those of 4th BW a square, painted on either side of the tailfin and on upper surface of the right wing; groups were identified by a letter superimposed on the geometric symbol.
By mid-1943 the number of B-17 groups stationed in England increased to 16. With such a force at hand, the 8th AF began to plan forays deep into the enemy territory, far beyond the contemporary range of escort fighters. The latter part of 1943 was to prove the blackest period in the history of the B-17 units serving with the 8th AF.
Between 24th-30th July 1943 the 8th AF carried out a series of bombing raids collectively known as the ‘Blitz Week’. The targets were, among others: Hamburg, Kiel, Hannover, Kassel, Oschersleben and Warnemünde. Six missions in seven days reduced the number of airworthy B-17s from about 330 to less than 200. The number of casualties – injured, killed or missing in action – equaled 90 crews.
On 17th August 1943 the 8th AF conduced the largest raid to date and, at the same time, its first shuttle mission. The plan called for a double strike at Schweinfurt and Regensburg. Overambitious and too complex, it was doomed to fail, and the 8th AF suffered horrendous losses – 60 B-17s failed to return (16% of the dispatched force).
September 1943 saw the introduction of the last B-17 model produced in substantial numbers – the B-17G. Its most distinctive feature was the remotely operated chin turret (in fact, the last 86 production B-17Fs already had it), a countermeasure against frontal attacks by German fighters. More refinements were incorporated during the production run. Waist gun positions were staggered to give the gunners more room. Later, the waist gun stations were enclosed by Plexiglas panels. The tail gunner station was also modified; it was fitted with the so-called Cheyenne turret, which offered a greater range of traverse.
The B-17G was truly a ‘flying fortress’, armed with 13 heavy (.50 inch) machine guns: two in the chin turret, two in the nose (cheek guns), two in the top turret, two in the ball turret, two in the mid-section on either side of the fuselage (waist guns), one manned by the radio operator and two in the tail. Overall, 8,680 B-17Gs were built. 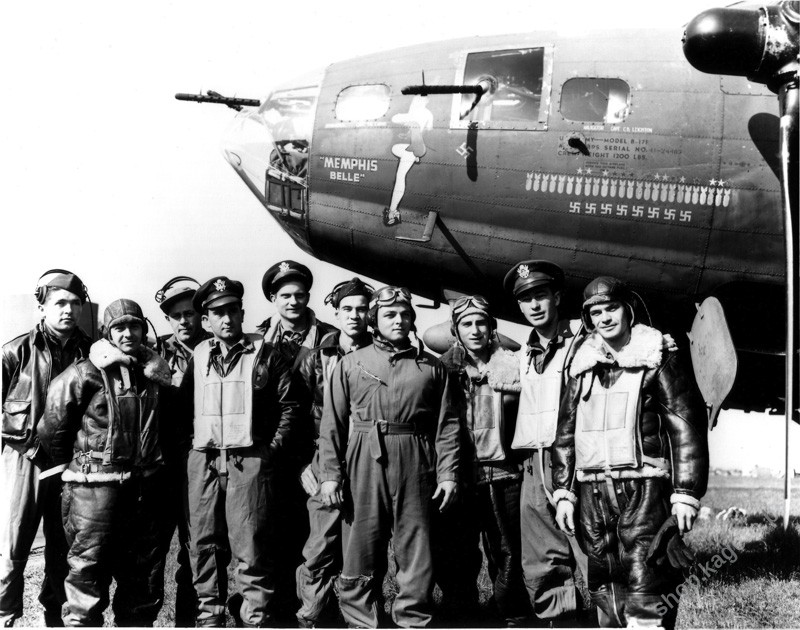 In mid-September 1943 the two Bombardment Wings, 1st and 4th, were re-commissioned as Bombardment Divisions. The problem of locating targets hidden under clouds, which haunted the Americans from the beginning of their operations over Europe, led to forming a RAF-style Pathfinder force, which debuted in late September 1943. Two component squadrons of 482nd BG received B-17s equipped with the British-designed ground mapping H2S radar. Initially the radar was mounted in a gondola under the nose. Although not overly accurate, it became useful for BTO (Bombing Through Overcast) missions. Another electronic aid adopted in 1943 was the AN/APT-2 Carpet radar jammer.
Between 8th-10th October 1943 the 8th AF carried out a series of raids against a variety of targets, including Bremen, Münster, Focke-Wulf plant at Marienburg (presently Malbork, Poland) and U-Boat yards in Danzig and Gdynia on the Baltic Sea. Undeterred by the losses (which amounted to 83 B-17s in three days), on 14th October the 8th AF again set out to strike at Schweinfurt. That day is duly remembered as ‘Black Thursday’ – 60 B-17s were shot down, 5 more crashed in England, and 12 were scrapped after landing, for a total loss of 77 aircraft (over 20% of the striking force).
The following month H2X ‘Mickey’ radar, an improved American derivative of the British H2S, went into use for the first time. In B-17G the room under the nose was occupied by the chin turret, hence the radar was mounted in the place of the ventral ball turret (the radar dome, like the turret it replaced, could be lowered and raised back into the fuselage).
Between 20th-25th February 1944, as part of the operation ‘Argument’ (better known as the ‘Big Week’), B-17s of the 8th AF targeted German aircraft industry in Leipzig, Brunswick, Regensburg, Schweinfurt, Augsburg, Gotha, Stuttgart and others. The losses amounted to almost 100 B-17s. On 6th March 1944 the 8th AF, dispatching 504 B-17s, carried out its first effective bombing of Berlin. Fierce fighter opposition claimed 69 bombers, including 53 B-17s (the highest number lost by the 8th AF in a single day). 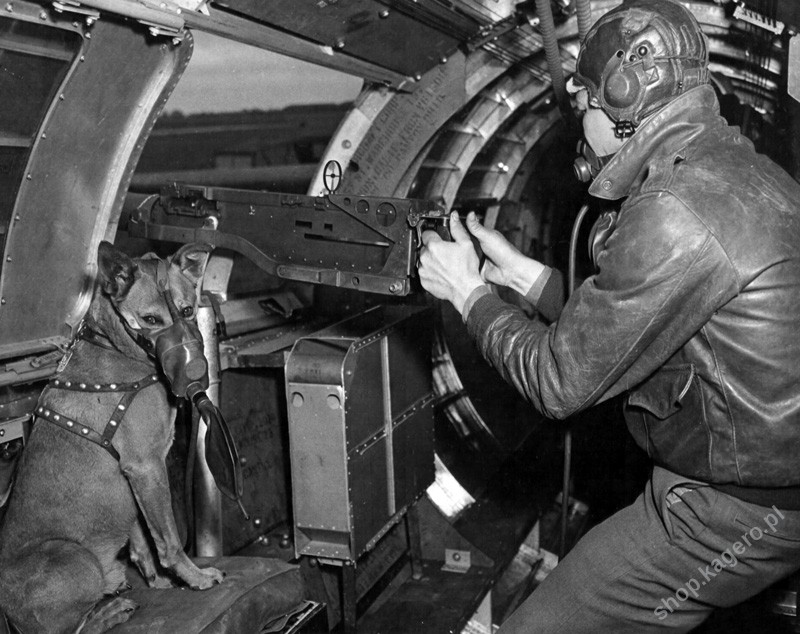 Beginning with May 1944, the 8th AF focused on German oil industry. In the latter part of the year the ‘Mighty Eighth’, as it came to be known, could dispatch over 1,000 heavy bombers on every mission, and strike at a dozen or so targets simultaneously. During that period B-17s attacked targets as remote as refineries in Brux, Czechoslovakia, and Pölitz (presently Police, Poland), and Focke-Wulf plant in Poznań.
Between June and September 1944 the B-17s of the 8th AF participated four times in the operation ‘Frantic’ – the shuttle missions to Ukraine and back (via Italy on the return leg). Occasionally they were called upon to support ground operations by striking the enemy directly behind the frontline, most notably during the Normandy landings in June 1944, and during the German counteroffensive in the Ardennes at the turn of 1944/45.
On 1st January 1945 the Bombardment Divisions of the 8th AF were renamed as Air Divisions. Berlin was targeted a few more times; on 3rd February 1945 over 1,000 B-17s bombed the capital of the Third Reich (23 failed to return). The final heavy bomber mission of the 8th AF, against armament works at Plzen, was flown by B-17s on 25th April 1945.
Seventeen Flying Fortress aircrew members were awarded the Congressional Medal of Honor by the war’s end. Twelve of them served with the 8th AF (one with 15th AF, and four in the Pacific). Of those twelve awards, seven were posthumous.