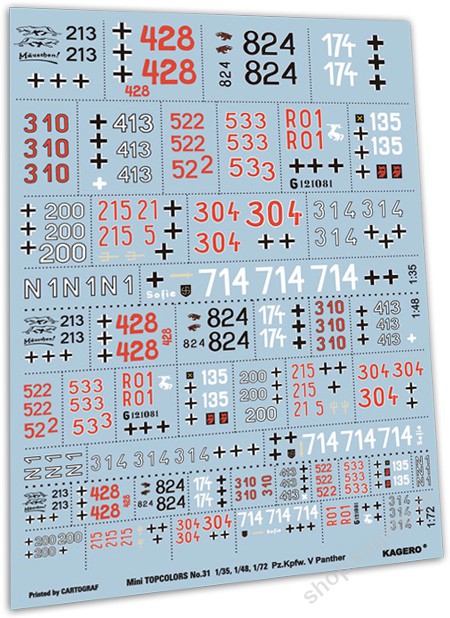 Painting schemes of Panther tanks, like any other German combat vehicles of WWII era, evolved with time and were specific to various theaters of operations. Nevertheless, they were consistent with norms and standards operative in the German Armed Forces. Obviously, there were exceptions to the rules. Those were usually caused by lack of suitable paints and multiple overpainting of a particular vehicle.
A major change in the camouflage system of the German combat vehicles, which stemmed from frontline experiences, occurred in early 1943. It had been discovered that the commonly used dark gray color (Panzergrau) offered hardly any camouflage in open steppes of Russia. This fact led to mounting losses among the ranks of the Panzerwaffe. Following Army Communiqué (Heeresmitteilung) HM 1943 No. 181, dated 18th February 1943, the dark gray was replaced by dark yellow (RAL 7028) as the base color for all German vehicles, supplemented by red brown (RAL 8017) and olive green (RAL 8002). The three colors served to create a great variety of painting schemes. Factory-fresh vehicles were supplied in the dark yellow factory base coat, to be painted at unit level with disruptive patterns of red brown and olive green according to regional and seasonal requirements. In winter most Panthers were painted with white distemper. Winter coatings differed, too. Some tanks were carefully camouflaged, whereas others only perfunctorily. In some cases only turrets were whitewashed. There were also more elaborate patterns in use, aimed at breaking up the outline of the vehicle.
In September 1944 Zimmerit (a coat of non-magnetic plaster which covered armor plates to prevent a magnetic mine from clinging to the metal) was phased out of use. This decision shortened production time by six days. At the same time that the Zimmerit use was discontinued, the increasingly unfavorable strategic situation faced by the Panzerwaffe demanded another revision of the camouflage colors and patterns it used. A new olive green color (RAL 6003) was introduced. It was slightly darker than its predecessor, while the new red brown (RAL 8012) was of more red tinge. However, old paints from stocks were also in use. Hence, in some cases new vehicles featured old colors, while older tanks sported new paints. Beginning with November 1944, the M.N.H. (Maschinenfabrik Niedersachsen-Hannover) plant delivered tanks with red oxide primer as the base color, supplemented by patches of dark yellow, olive green and red brown. Due to shortages of the dark yellow paint (RAL 7028), at times it was replaced by the darker RAL 7021.
The final stage of the war saw a breach of all camouflage systems and rules. Panthers, like any other German armor vehicles, were simply painted with what was still at hand. Since the dark yellow paint was increasingly hard to come by, olive green or even red brown colors were used instead as base colors

Discount code D3P534. This code authorizes to order of book from a 20% discount in the online store www.shop.kagero.pl. The code should be entered in cell of "Coupon code"  in the basket of your order. Valid until November 1st 2015.